COPING WITH CONTAGION: Our Retirement Community Hunkers Down (March 31, 2020)

The coronavirus crisis is escalating so rapidly that a month feels like forever. The pandemic’s global and national dimensions are expanding exponentially, spinning out of control.

Here’s a ground-level journal of how the surging storm began to penetrate the perimeter of our elder village.

March started routinely enough in our CCRC. Our family calendar was crowded with on-campus social engagements and activities. Nancy and I were re-booked for a half-dozen lunches and dinners with fellow residents. (We’d had to defer these welcoming invitations while Nancy underwent marathon medical tests probing her excessive weight-loss. Thankfully, all test results were negative.)

Two live musical performances were scheduled during the first half of the month – a chamber recital and a national boys’ chorus. Weekly movie screenings were also on tap.

Many of us were glued to our TV sets on the evening of March third for coverage of Super Tuesday Democratic Primaries. Former Vice President Joe Biden made a dramatic surge, building on the South Carolina landslide that had salvaged his slipping campaign.

Celebrating Nancy’s birthday on the fifth was interrupted by her drive back to the Monterey peninsula for appointments with medical specialists scheduled prior to our move. But she fit in a ballet performance at Carmel’s Sunset Center. And our Community would be hosting a shared March Birthdays Banquet on the twelfth.

I labored daily by email and phone helping organize my high-school class’s fast-approaching 60th Reunion. With Nancy’s crucial layout assistance, my core task was to compile and distribute classmates’ brief essays and photos on the theme of Senior Passions & Preoccupations. We planned to combine this early-April gathering with a looping road trip through southernmost California.

Closer to home, we were liaising with the Retirement Community’s Grounds Supervisor, a local contractor and nursery to plant a mini-garden around our apartment patio by the end of March.

In our spare time, we squeezed in a pair of Magical Mystical Tours, up and over the Coastal Range. We had started these spontaneous road rambles while living in Italy. These two carried us to a reacquainting stroll through Half Moon Bay and an Ent-lauding hike in Big Basin Redwoods State Park.

So much for business-as-usual. Our lives and world convulsed on Friday, March 13. President Trump ended weeks of downplaying the coronavirus threat by declaring a national emergency, launching negotiations with Congress on a relief-funding package.

On the same day, our Retirement Community’s Executive Director electronically published a sweeping pandemic-response Action Plan. It would be immediately implemented in all of our Community owners’ seven senior-care facilities throughout the San Francisco Bay Area.

Of course, the virus had been circling the globe since January – from China through Asia to Europe and across the States. But somehow this rolling tsunami didn’t command our full attention until campus services and movements were dramatically restricted. 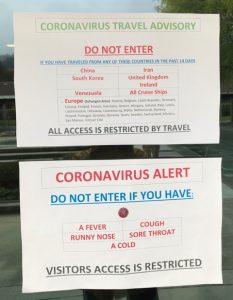 In the absence of coherent federal leadership, California’s State Government and county authorities were moving fast to construct a defensive system. At first, the components were recommendations for voluntary behaviors. Report all recent Asian trips. Maintain six-foot intervals between individuals for “social distancing”. Substitute elbow bumps for handshakes. Wash your hands thoroughly and frequently.

Our Retirement Community’s management team relayed these directives and filled in the blanks with campus-specific applications.  Reminder signs were posted on main doors of the Community’s public buildings.

By the time our Executive Director convened an intramural videoconference on March 17, recommendations were being 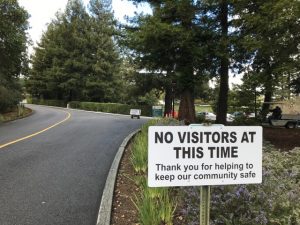 replaced by requirements. All residents, including those of us in Independent Living, were directed to “shelter in place.” We should remain in our apartments, receiving a limited menu of staff-prepared meals at our doors. All campus gatherings were cancelled – including concerts, lectures, fitness classes, bridge games and committee meetings. No driving off-campus, though walking the perimeter for health and fitness was strongly encouraged. All non-essential visitors were banned from campus, including residents’ family members and individuals’ caregivers. The ED’s tone and message were unambiguous: “We need you to treat this seriously. If we don’t keep this virus away, dozens of you could die. This is our Pearl Harbor.”

Almost overnight, the animated energy that characterized our elder village was palpably diminished. Silencing isolation displaced bustling interaction. Gone was the vibrant hum rising from packed dining-room tables. Gone, the crowded calendar of group activities. Gone, the dozens of hourly encounters and chats between passing pedestrians. At first, gardening crews and renovation contractors’ teams remained on the job. Then this too terminated within days. Now meal-deliverers and housekeepers were the only workers in evidence. The campus was fully occupied but hunkered down. 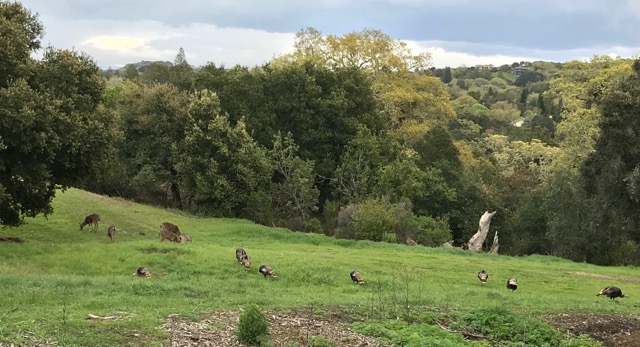 As county work-from-home and school-closing directives switched from voluntary to mandatory, Nancy and I noticed an unprecedented volume of weekday traffic on neighborhood hiking trails. Mushing moms with excess-energy tykes and pups, to be sure, but also solo joggers who would normally be in offices. We all seemed to be utilizing open space for therapy: routine physical fitness now combined with mental and emotional relief from hemmed-in restlessness. (As a postscript, the authorities have just closed the Open Space Preserve adjacent to our Community because the overflow crowds of walkers were not maintaining safe six-foot intervals.)

Thus far, our family of two is adjusting to the new domestic constraints with good humor and minimal discomfort. A friend suggested we might be relatively relaxed due to decades living and working in developing countries. Teasing aside, we’ve in fact had long experience making do, adjusting to restricted freedom of movement and to chronic shortages of consumer goods, from chocolate to gasoline.

By good fortune, we’d completed most of our unpacking and settling in before sequestering commenced. Now we’re converting lockdown to opportunity by reorganizing drawers and closets where things were just stashed on arrival. Confined to quarters, we’ve the luxury of doing it right.

We know how to entertain ourselves and are both avid readers. Despite severe downsizing, we’ve brought with us now-precious shelves of unread books, as well as treasured volumes ready for re-reading. Nancy maintains an active circle of Facebook Friends. I’m sustaining my blog productivity.

It also greatly helps that we’d opted for a one-meal-per-day contract and are already accustomed to cooking for ourselves in our apartment kitchen. Before the cordon tightened, we laid in a generous cache of provisions and have now signed up for local groceries deliveries. Several neighbors have hinted they’re finding the new meals-at-the-door routine less satisfying. Not only had they promised themselves upon taking up residence “never to cook again!” But they’d relished Community dining-room meals as welcome occasions for fellowship.

Within the campus perimeter, I get the impression the new regime and restraints are taking hold. The first week of Action Plan implementation was frenetic, with Community managers scrambling to catch up with a deluge of layered governmental directives. Now arrivals and departures are being screened, staff retrained, delivery and dispatching procedures simplified. Nearly all resident intranet messages are supportive and reassuring.

This perceived equilibrium is almost certainly temporary. All will swiftly and dramatically change if (when) coronavirus cases are detected on-campus. Local newspapers are reporting the first cases in nearby Palo Alto senior facilities. (The State Governor has just estimated that a majority of all California citizens may get infected.) Widespread testing and mandatory isolation would uncomfortably up the ante.

We’re all learning about logarithmic curves. With every new case infecting two to three others within five to seven days, that single source can provoke 4,000 more cases within three months. As I write, there are 6,000 confirmed cases in California. Future tallies will depend upon thoroughness of testing, accuracy of aggregation and strictness of isolation. For a senior community like ours, the most relevant – and intimidating – statistic is the fatality rate for symptomatic cases. For countries reliably reporting thus far, this rate has consistently registered as 8% for infected persons 70-80 years of age; and as nearly 15% — 1 in 7 — for those over 80.

Most of these possibilities are beyond our control. We can obey campus rules, eat healthfully, be neighborly and keep up aerobic exercising. How the pandemic will play out in our community, area, state and nation remains very much unknown, though soon revealed.

In an optimistic scenario, the public-health systems will make up for delayed preparation, and stringently enforced social-distancing will “flatten the curve.” These tandem efforts can buy time for medical facilities to assemble needed beds, specialists, supplies and equipment; and for a safe, effective vaccine to be developed and distributed. In this projection, the coronavirus may hospitalize few and kill fewer still.

A grimmer scenario would envision delayed testing coming too late for containment, with the pandemic spreading in a series of waves over 18 or more months’ duration. With up to a third of the U.S. population (100 million) infected, medical facilities, services and supplies would be overwhelmed by the surge. More than two million could die – mostly seniors like us. The resulting economic and political disruptions could be at least as destructive and prolonged as the medical crisis itself.

Only recently, this dire prognosis would have been an implausible plot for an apocalyptic B-movie. Short weeks ago, Nancy and I were focusing on lunches with neighbors, a high-school reunion and mountain-park picnics. Now all bets are off. No one can convincingly predict what is coming next, or how we will weather it. Who would have anticipated that our national institutions, capabilities and confidence could be so swiftly strained?

Our Resident Community’s Executive Director raised a poignant protest: “I like to read History. I’m not much interested in living through it.”

Ready or not, here it comes.