It’s the first morning of my Amtrak ride from Emeryville to Denver. I’m so absorbed in my Sunday newspaper that I don’t detect the Observation Car tables and chairs filling up around me. The fact that my new neighbors are almost totally silent contributes to the surprise. I look up to discover a distinctive party of two adult couples and six kids, ranging from teens to a toddler. Full beards and a bouquet of bonnets catch my eye. I’m about to meet the Millers of Orwell, Ohio. 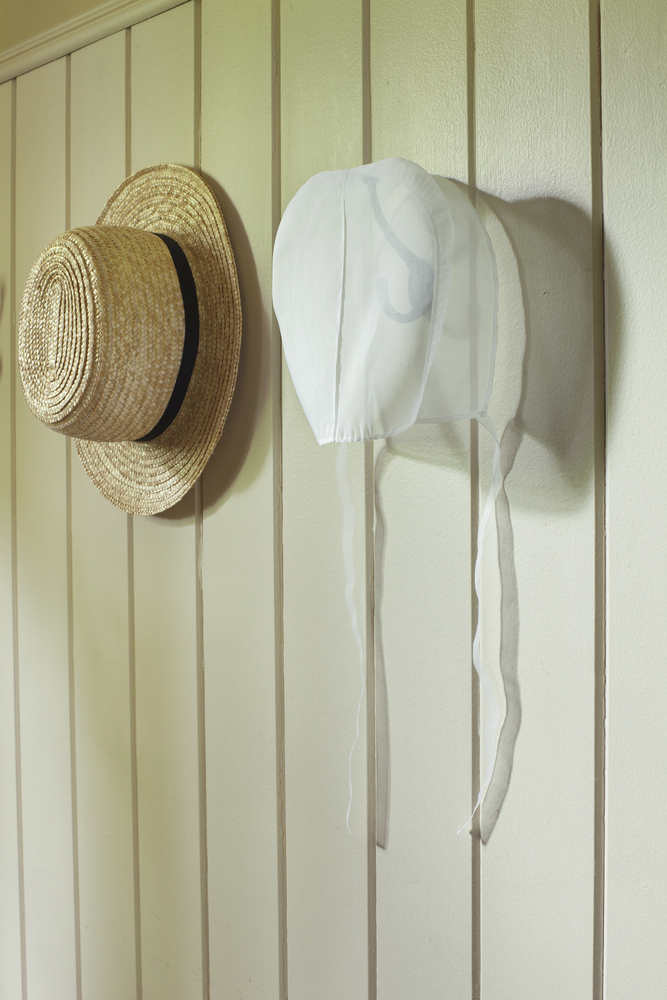 The California Zephyr brings us together. Over two scenic days of slow, steady climbing, we grow closer through a series of relaxed, revealing conversations. I’m hard-pressed to think of a better example of the unplanned delights of senior train travel. It’s a privilege to share time with this remarkable family.

Daniel is my main contact as we get acquainted. He’s the patriarch of a hierarchical Amish family including seven children and 30 grandchildren. Eighteen years ago, Daniel and his wife Irene took their children on an extended train trip, a never-forgotten excursion that has become part of family lore. Now they are travelling again, this time for the benefit of the next generation. This is no casual jaunt. The family has saved for 12 years to pay for the new expedition. Maple-syrup production, bake sales and empty Coke cans scavenged and recycled by the grandkids have all contributed to the fund.

This time Daniel has passed the baton to his second son, Allen, to plan the ambitious itinerary. One logistical challenge is the Amish doctrine that prohibits members from driving motor vehicles. So for local transport at interim stops between train rides, they need to contract professional services. From Cleveland they trained to Chicago, then on to Flagstaff, Arizona for a side trip by chartered van to the Grand Canyon. On to L.A. where the grandkids saw an ocean for the first time. Up to San Francisco with an excursion to Yosemite. Now on through the Sierras and Rockies on the Zephyr.

This two-week circuit was budgeted at $500/adult. But only by reclining in train seats at night, forgoing the luxury of sleeper compartments. And only by Irene and Allen’s wife Cindy preparing carry-on provisions to reduce on-board food purchases. No one in the family is complaining about this frugality. Self-reliance and -restraint are core Amish principles. The children’s erupting smiles and bright eyes suggest they’re enjoying every mile.

Daniel and Allen take turns answering my questions about their denomination’s history and precepts. The Amish originated as a Swiss-German branch of the Protestant Reformation in the 16th Century. Two hundred years later, they fled Continent-wide warfare in Europe and immigrated to Pennsylvania. Today, four major Amish communities totaling 250,000 members are flourishing, spread across Pennsylvania, Ohio, Indiana, Wisconsin, New York and Ontario. Daniel tells me “we’re the fastest-growing population in the world,” doubling in size every 20 years.

The Amish believe in simplicity and mutual support. Since hard work is considered godly, “labor-saving” is not a virtue. Reliance on modern technology is accordingly minimized. Electricity, telephones, TVs, the internet and motor vehicles are all avoided. Yet the communities interact intensively and willingly with non-Amish neighbors. Emerging from primarily farming backgrounds, most Amish currently work outside agriculture, maintaining herds and crops mostly for family kitchens. 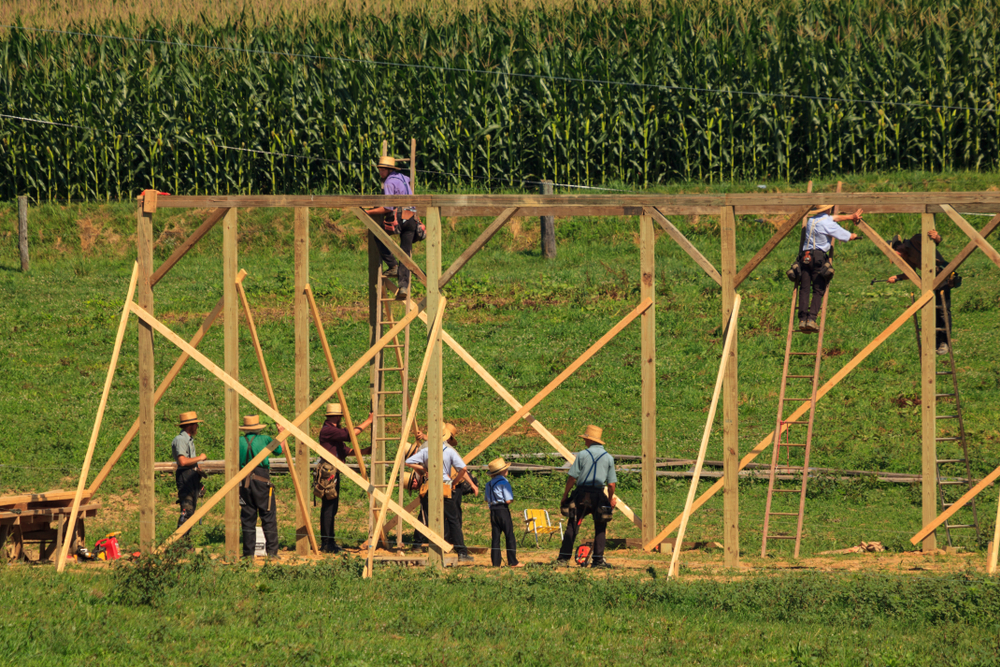 The Millers accept without resistance the obvious curiosity of our fellow passengers. Their costumes make stares unavoidable. Amish men wear suspenders and long-sleeved shirts, topped by broad-brimmed hats when out of doors. They uniformly grow beards but I learn that mustaches are forbidden, as symbols of militarism for this pacifist sect. The women and girls are in long-sleeved, long-hemmed dresses, mostly dyed indigo. White bonnets for the two wives, black for the unmarried girls.

With beautiful, unblemished skin, these are exceptionally handsome folks. The family resemblance is very strong. What strikes me much more than appearances is the youngsters’ relaxed good manners. They sit for hours playing simple card games with their grandmother or drawing on sheets of paper. The oldest girls pay close attention to their younger siblings, taking turns to comfort and distract them when they grow restless. No raised voices, much less tantrums. No videogames or corridor dashes. Yet clearly these are intelligent, animated individuals, in no way subdued. Chat jumps fluidly between English and traditional Swiss-German (“Pennsylvania Dutch.”)

I notice that the family does enjoy store-bought snacks so I pass around a packet of peanut M&Ms. Six year-old Joseph plunges his hand into the sack and brings out a clenched fist. Grandmother’s Swiss-German command must mean “Open,” because the closed hand uncurls, revealing five gleaming treasures – red, green, blue, yellow and brown. Joseph’s mother utters another word from the adjacent table and his sisters reach over to remove four treats from his palm. A formative life lesson in two monosyllables.

Allen and I engage in a playful contest to see who can spot the most wild game on the passing hillsides. When I forfeit the trophy by mistaking a dark storm drain for the southern end of a north-bound moose, the children chorus delight.

The Amish stop formal schooling after eighth grade. Vocational training continues through the age of 16. After a sanctioned rumspringa (running-around) period, 90 percent of Amish teens return to marry within the Church.

Women work mostly in the home, with school teachers and midwives as exceptional vocations. Despite this gender split, women have full and equal votes in the Ordnung assemblies which decide Amish community policies. In these same conclaves, elders are given deference and the right to speak first. Daniel speculates that one reason the Amish haven’t embraced more technology is that “older folks, as a rule, don’t like change and we try not to force it on them.” He closes the thought with the hint of a smile, “Politicians could learn from this.”

Allen and I tiptoe into controversial topics. Despite the extreme Midwest weather events in the headlines, he doubts the gravity or imminence of global warming. “Lake Erie goes up and down,” he argues. “This winter was wet, the last dry.” Yet he’s not dogmatic or closed-minded. He readily accepts that the Arctic ice is melting, with accelerating risk for shoreline cities. And he strongly supports wind power in preference to polluting coal. Even on religious topics – “Muslims’ holy book commands them to kill non-believers” – Allen is honest enough to concede that comparable wrathful injunctions can be found in the Old Testament. Daniel lightens the tone by sharing a memory of a winter festival, driving a horse-drawn wagon of caroling children through the snow to neighbors’ farms.

Two cultures reaching for empathy across a train-car aisle. When I disembark at Denver, my new friend asks if I might like him to mail me photos of his handcrafted stairs. I’m moved by his gesture, ask him to please do so and promise to send a signed copy of my memoir in return.

Back at home, I read a bit more about Amish doctrine. Twinned aspirations are rejecting hochmut (pride and arrogance) and embracing demut (humility) and gelassenheit (calmness and composure.) Sounds like a recipe for Agile Aging.