In my roomette and ready to roll. I love my Amtrak sleeping compartment — snug, comfortable and private. I’ve never traveled in a single compartment before. Nancy and I usually book a larger double. This one reminds me of a shipboard cabin — no wasted space, everything in its place. Eight feet long, five wide, two facing benches, a shelf for my hand luggage, wall hooks for robe and pajamas and a giant window. All this on the upper level of my sleeper car, with great visibility. At night the attendant will work his magic and convert the benches into a surprisingly wide bed. The common bathroom is five paces along the corridor. My suitcase is safely stowed on the car’s lower level. I’m purring in my solo space, all set for the next two days and a night. Nine-fifteen a.m. — the first surge of movement. Right on time. Away we go!

As we accelerate out of Emeryville, I’m reminded one reason I so love travelling is that starting out is a fresh beginning. Untried, untested, unspoiled. An irresistible invitation for an optimistic nomad.

This quick excursion should be a satisfying senior adventure. I’ve a slot of free time after launching my blog. Nancy is up to her elbows in her home studio, cranking out the final volume of her West Virginia mystery trilogy. Some years ago she took this same train all the way to its Chicago terminus, connecting on to Pittsburgh to launch an Appalachian book tour. She returned home heralding the train travel as an uplifting highlight of the entire trip. I’ll be retracing her route only as far as Denver, for a few days of sightseeing in the Mile-High City.

The California Zephyr is America’s second-longest train route, covering 2,440 miles between Emeryville and Chicago. At 55mph average speed, it should reach its final destination in 51 hours. The Zephyr’s eastbound schedule has been calibrated for optimal passenger pleasure. Day One will take us up and over California’s dramatic Sierra Nevada range. Then a night for sleeping while we cross the visually less interesting Utah salt flats. Day Two will be devoted to traversing Colorado’s thrilling Rocky Mountain gorges. Some anonymous Amtrak committee deserves a gold star for crafting this consumer-friendly timetable.

When I boarded, I was surprised by this historic train’s short length, in dramatic contrast to serpentine freight chains. Twin locomotives, one baggage car, two sleepers, one diner, one observation car and two coaches. A compact nine units. 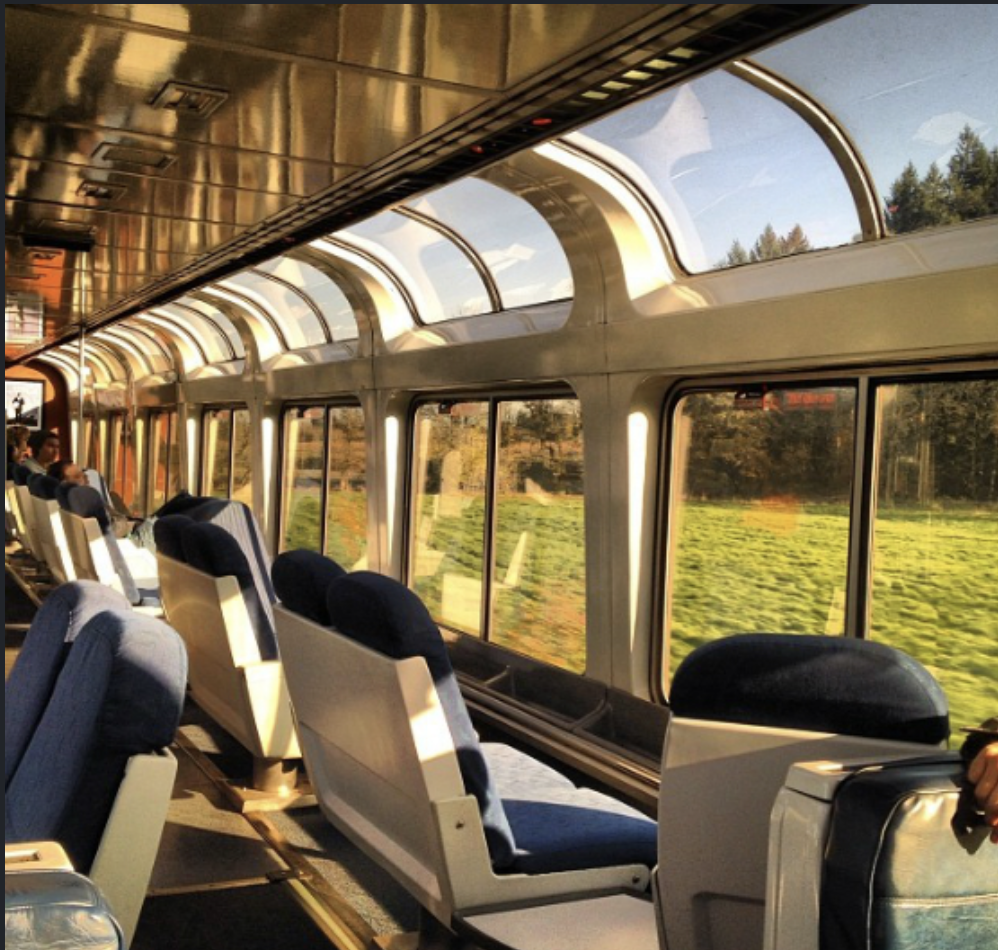 As our train gathers speed through Richmond and Martinez, I stroll to the observation car, with its sky’s-the-limit transparent barrel ceiling. In mid-morning, I have this viewing area almost all to myself. Along with a latte and doughnut, I devour the scenery, amazed at how the wetlands and Delta landscapes I barely notice when driving through on the Interstate now look vast and unspoiled from the nearby but isolated railway right-of-way.

Three meals a day are included in the price of my train ticket; only alcohol and tips are extra. At my first lunch, I’m reminded of Amtrak’s managed but hospitable seating routine. The dining-car staff fill the limited seats by ushering singles and pairs into four-person booths. Veteran passengers take the get-acquainted lead. “Where are you headed? Where did you board? Have you been on the Zephyr before?”

At this debut and follow-up meals, I learn that many older couples repeat seasonal Amtrak expeditions like migratory wildfowl. They ride trains all over the country to visit family and friends. One woman smiles: “I know my brother’s glad to see us. But after three days, I’m also sure he’s glad to drive us back to the train.” Some regulars use Amtrak to reach regional tourism hubs where they rent a car for local side trips. I spot and hear numerous European diners. Could they be taking advantage of a bargain package like Eurailpass for Americans?

Table banter is cordial but tacitly restrained. As if we’re instantly intimate but only through dessert. (I’m also informed that Amtrak menus are standardized nation-wide. Tasty enough but soon thoroughly sampled on multi-day routes.)

On this trip I meet several train buffs returning home from the 150th Anniversary of the completion of the first transcontinental railroad at Promontory, Utah. Evidently 20,000 fans assembled on the whistling prairie to celebrate this historic occasion on May 9. “Abe Lincoln envisioned the connection,” one souvenir-capped enthusiast laments. “It’s a tragedy he didn’t live to see the Golden Spike.”

During afternoons and evenings, the observation car is the most popular room in the house. Every seat is taken, by solo readers and ear-bud listeners or chatting groups. Red-blazered docents volunteer thumbnail sketches of history and geography. Passing through Sacramento prompts a seminar on John Sutter and the California Gold Rush. The next day we’re told about the two years it took to drill the 6.2-mile Moffat Tunnel from both directions through the Rockies. The two drills reassuringly punched through at the same spot.

I’d wondered how well I’d sleep, with the swaying motion of the car and the clickedy-clack percussion. Both turn out to have a soothing effect. I’m lulled by the gentle rhythm. A couple of senior strolls to the shared bathroom teach me to hold on to wall railings. But everything is clean and convenient and my night is restorative and restful. 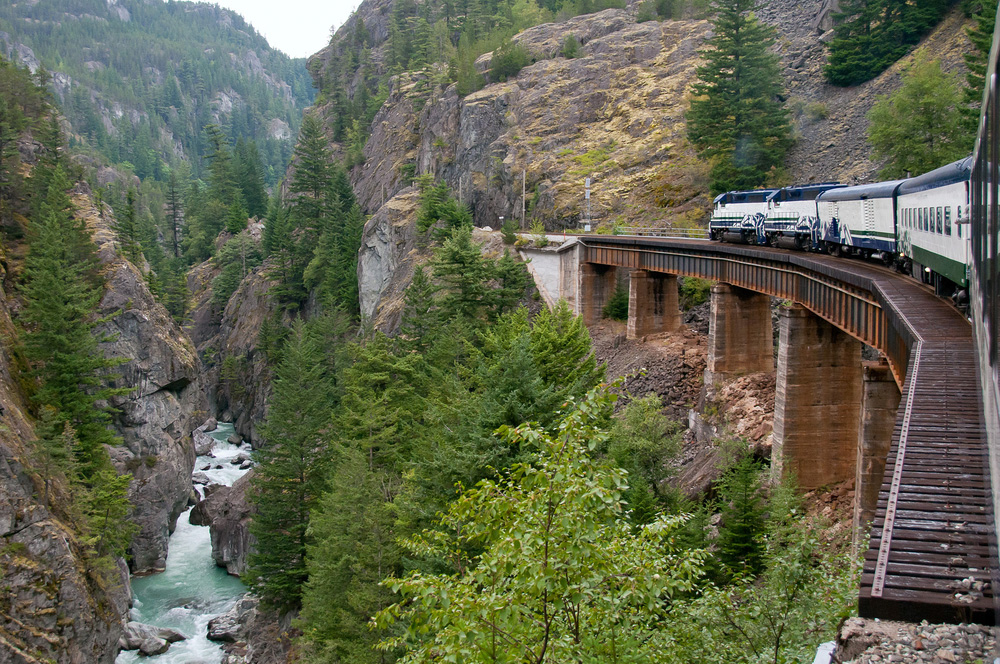 The mountain scenery, as Nancy had promised, is spectacular. I’m captivated by the white-water chute through the Sierras from Truckee to Reno. In mid-May, there are acres of snow on the high ground. The next day, Rocky Mountain gorges are narrow defiles, with the rail bed frequently gouged out of vertical cliff faces. Wild game are relaxed and visible: deer, of course, but also elk, moose and bald eagles. The once-daily train may spook them less than would 24-hour auto traffic. Past the 9,000-foot summit of the Continental Divide, we traverse a series of splendid hanging valleys, dotted with fat Black Angus and even llamas. Fly-fishermen in long-oared skiffs cast for rainbow trout. We descend through switchbacks down the Rockies’ eastern face. In the afternoon glow, the Great Plains stretch into infinity. Downtown Denver’s sudden skyscrapers soar above the expansive carpet.

What an exhilarating way to cross this marvelous country.